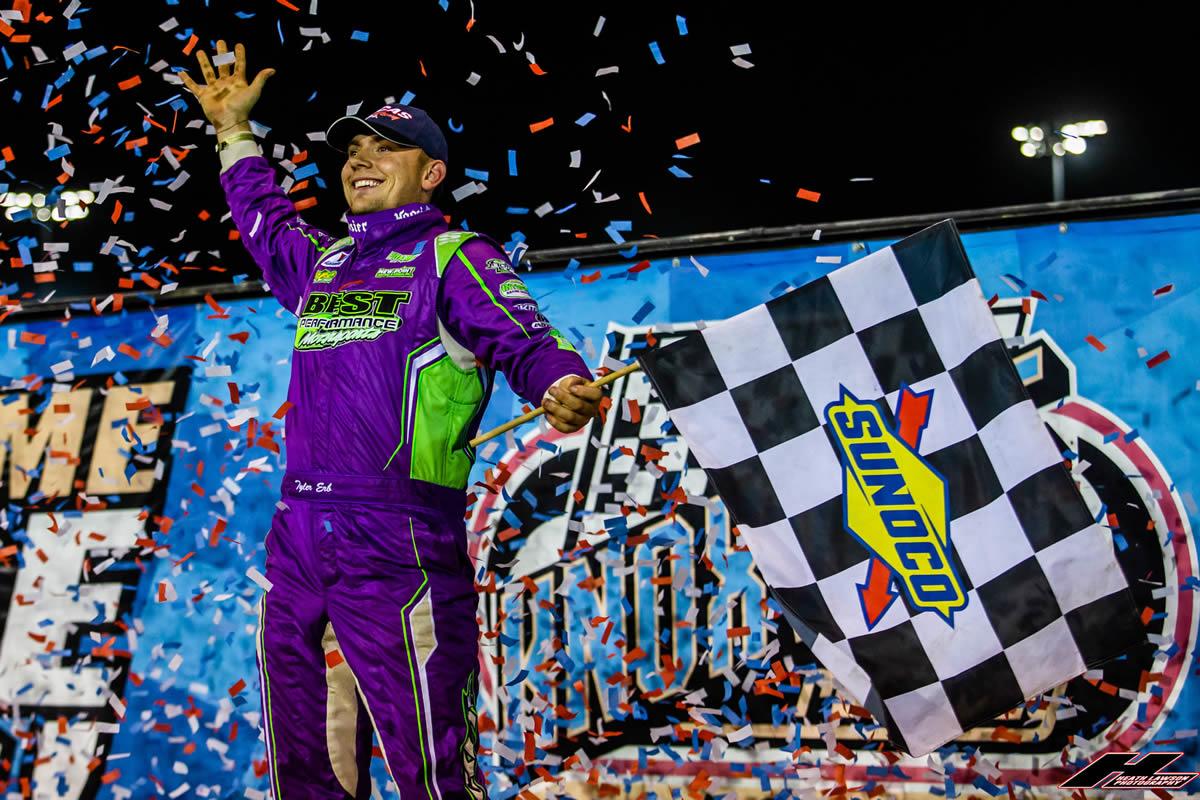 Thursday and Friday night’s victories rewarded Erb with $7,000 each. Additionally, after relinquishing the lead due to a mechanical issue on Saturday night, Tyler’s crew were able to complete makeshift repairs, and he tagged the back of the pack before rallying back to a sixth-place finish.

“No doubt, we were bummed to not get the win Saturday night, but what an incredible weekend for our team. We swept the first two nights, and we were in the driver’s seat to win the $50,000 check on Saturday, and then a freak deal happened with a gear. My Winters rear-end did a great job of hanging on, and equally great was the job done by my crew to get me back out there. I rallied back to sixth, which again wasn’t a win, but in some ways it still felt like it,” Erb noted. “We’ve really hit our stride here lately, and I thank everyone who supports us and makes this all possible.”

Drawing 48 Lucas Oil Late Model Dirt Series (LOLMDS) entries, Tyler clocked in seventh fastest in his group before picking up a heat race win. Stealing the lead from polesitter Ricky Weiss on the second lap of the feature, Erb kept a charging Jonathan Davenport and Kyle Larson at bay in the closing laps of the race to capture his 13th win of the season and a $7,000 payday. He took the checkered flag ahead of Davenport, Larson, Ricky Weiss, and Kyle Strickler.

The following night, Tyler secured his spot into the preliminary feature with a fourth-to-second run in his heat. Overtaking polesitter Brandon Sheppard on the third circuit, Erb stormed to his second win in as many nights and 14th of his 2021 campaign. He took the checkers ahead of Tyler Bruening, Sheppard, Tim McCreadie, and Mike Marlar to claim $7,000 as he earned his 15th-career LOLMDS triumph.

With preliminary results from Thursday and Friday placing Erb on the front-row for the $50,000-to-win Knoxville Nationals finale, Tyler nosed ahead of Tim McCreadie for the lead on the 11th circuit and paced the field until mechanical issues sent him into the infield on lap 39. Charging from 24th, after his crew thrashed during the caution period, Erb advanced through the field to reel in an impressive sixth-place finish.

Tyler sits in sixth in the latest LOLMDS point standings.