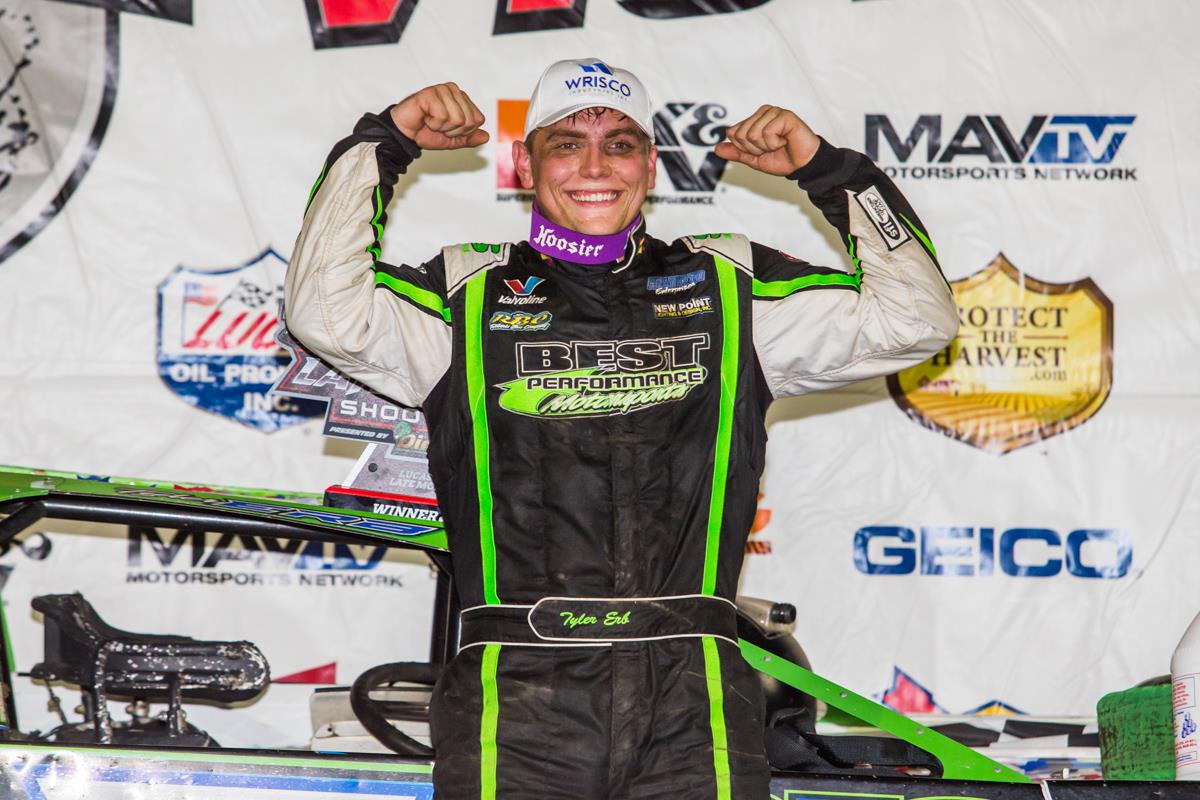 KOKOMO, Ind. (September 20, 2019) – Tyler Erb won the biggest late model race in the 72-year history of the Kokomo Speedway on Friday night in front of a packed house. The race proved to be a barnburner as Erb passed Hudson O’Neal on the 47th lap and then held off Jimmy Owens to score his sixth Lucas Oil Late Model Dirt Series win of the season.

Owens charged from the fourteenth starting spot to finish right behind Erb at the checkers. Hudson O’Neal had taken the lead on lap eight from Billy Moyer Jr. and received constant pressure throughout the 50-lapper, making for an exciting race for the lead throughout the event.

Hudson O’Neal began showing signs of smoke and then jumped the cushion in turn four as he and Erb headed to the start-finish line to complete lap 47. Erb was now out in front for the first official time during the race. Owens then got by Hudson O’Neal and began to track down Erb. Don O’Neal squeezed by his son at the checkers to finish third and Tim McCreadie finished fifth behind the O’Neal father and son combo.

Erb’s seventh career Lucas Oil victory came in a hotly contested race that saw three different leaders. “Man, that was an exciting race. We were all slicing and dicing out there. I have watched videos from this track and tried to emulate what some of the sprint car guys do here. We could get a great run off of turn two and a couple of times I had gotten by Huddy and then a caution would come out. Thanks to everyone at Best Performance for giving me this opportunity to race with them. It’s been a dream come true and hopefully we aren’t done winning the rest of the year.”

Owens; who won a week at ago at Knoxville; mostly used the low groove during tonight’s race to gain spots and take shot at Erb on the final lap. “I swung the car out wide and I hoped to get a good bite off of four but he [Erb] beat me to the finish line. That was pretty good race with O’Neal and Erb. Once I got up there, I thought here we go again it’s going to be another close finish and it was.”

Don O’Neal; who missed two and a half months during the summer recovering from knee surgery; earned a podium finish. “It’s been a long-time since we’ve raced here. I am not sure what was happening with Hudson’s car whether it was a motor or power steering, but I was able to get underneath him at the end.”