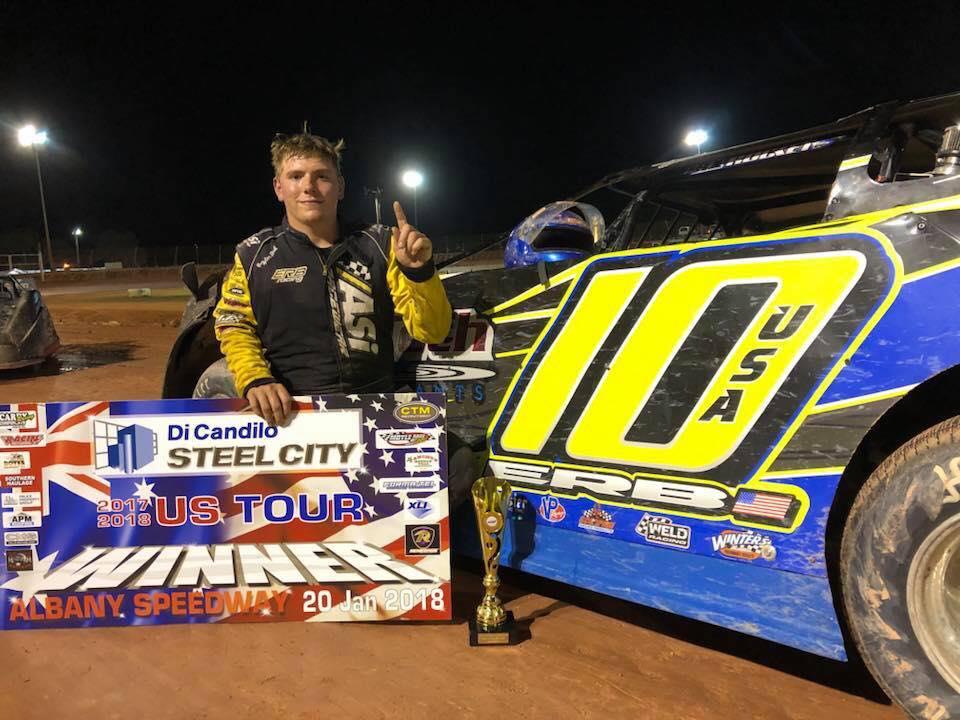 Tyler Erb breaks out the broom in Aussie Finales

“Heading to Australia to race, I honestly didn’t know what to expect,” Erb commented. “So to be able to win three out of the four races I entered was just awesome. I really want to thank Justin Pearson, Cameron Pearson, Kellee Pearson, Phil Pottage and HDD Racing for giving me the incredible opportunity to race in Australia. Everyone treated me like family, and I met so many new friends while I was there.”

After finishing in the runner-up position in his second heat behind Jason Fitzgerald, Tyler went on to claim the win in the USA versus WA Shootout, positioning him on the pole for the main event. Outrunning the 16-car field, Tyler Erb paced the field throughout the 30-lap feature to score his second win of the season. Craig Vosbergen, Devin Moran, Jason Fitzgerald, and Kye Blight completed the Top-5 finishers.

Wrapping up the USA Invasion Tour, Erb stopped at Albany Speedway (Albany, Western Australia) on Saturday with a comfortable 20-point lead in the championship standings. After laying down the fastest time in a field of 27 cars, Erb landed a heat race victory in the first round and a second-place finish behind Jay Cardy in the second round, earning him the fourth-starting position for the finale.

For more results from these events, please visit http://www.LateModelRacingWA.au .

Tyler now turns his focus to his racing endeavors on American soil. He will kick off his 2018 North American season on February 2-3 at Golden Isles Speedway (Brunswick, Georgia) with the Lucas Oil Late Model Dirt Series (LOLMDS). On Friday evening a $10,000-to-win event will be contested, while Saturday night will post a $12,000 top prize.

For more information on the events, please visit http://www.LucasDirt.com

For the latest information on Erb Racing, please visit http://www.TylerErb.com .