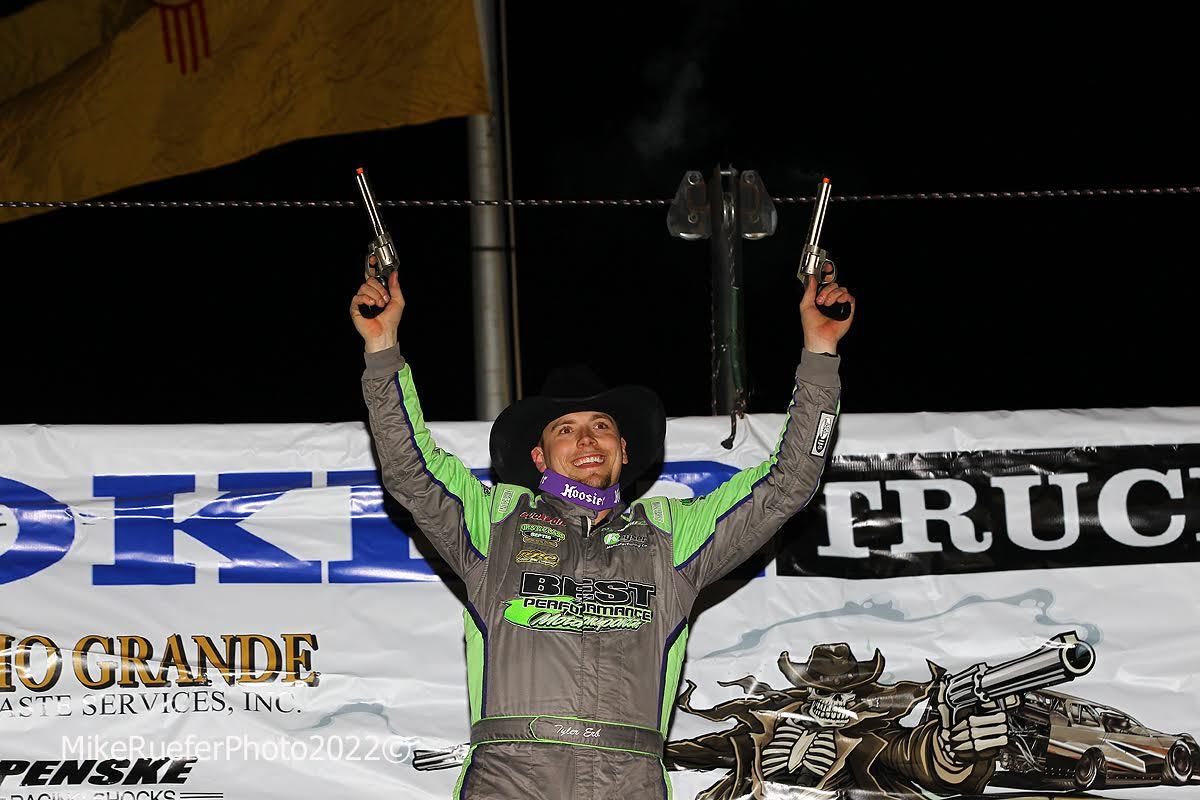 “It was a pretty solid week for us in the desert. We got a win, four Top 5’s and five Top 10’s, and then obviously the DNF on the last night, which was a tough deal,” Erb said. “Vado (Speedway Park) is a cool place, and we had a good time racing there. Now we’re in Texas getting geared up to kick off the Lucas Oil (Late Model Dirt Series) season next week at Golden Isles (Speedway). Thanks everybody that helps make this car go in circles.”

Tyler Erb traveled to Vado Speedway Park (Vado, New Mexico) on Saturday afternoon to lift the lid on the 2022 season with the 16th annual Wild West Shootout. Drawing 31 Late Models, Erb timed in fifth-fastest in his qualifying group before placing third in his heat race. With $5,000 on the line in the feature, Tyler clawed forward one spot in the 40-lap affair to register an eighth-place finish.

For another $5,000-to-win A-Main on Sunday, Tyler followed up the third-fastest time in his group with a second-place finish in his heat race. Earning the fifth-starting position for the A-Main, Erb snuck ahead of Garrett Alberson for the lead on the sixth circuit for two laps until surrendering the top spot later to Mike Marlar. With Alberson and Brandon Sheppard taking part in a heated battle for the lead in the final laps, Tyler attempted a last-lap slider but fell short at the line, trailing Sheppard to the checkers. Alberson, Marlar, and Jake Timm completed the Top-5 finishers in the 40-lap affair.

On Wednesday, Tyler Erb returned to the driver’s seat of the Best Performance Motorsports No. 1 Late Model at Vado Speedway Park (Vado, NM) for the third round of the Wild West Shootout presented by O’Reilly. Following a second-place finish in his heat race, Erb gained three spots in the 30-lap feature to bring home a podium finish. He followed Garrett Alberson and Mike Marlar across the line with Earl Pearson Jr. and Brandon Sheppard rounding out the Top-5.

For the fourth round of the Wild West Shootout on Friday at Vado Speedway Park (Vado, NM), Erb clocked in fifth fastest overall before dashing to a heat race win. Receiving the third-starting position for the A-Main via the redraw, Erb snuck ahead of polesitter Earl Pearson Jr. on lap 15 after the pair exchanged the lead while battling for the low groove. Fending off Pearson Jr. the second half of the race, Tyler recorded his first win of the season, which came ahead of Pearson, Bobby Pierce, Johnny Scott, and Mike Marlar. He earned a $5,000 payday.

On Saturday, Erb earned a spot into the redraw after picking up a heat race win. Rolling off fifth, Tyler dropped four spots in the 40-lapper to come in fifth. He followed Mike Marlar, Garrett Alberson, Earl Pearson Jr., and Ricky Weiss to the checkers.

After recording the fastest lap overall on his first lap of his time trial session, Erb tagged the wall on the second lap, leaving him with plenty of body work before his heat race. Outdueling Ricky Weiss to pick up the win, Tyler locked into the fourth-starting position for the $25,000-to-win Wild West Shootout finale. He was collected in a tangle late in the race while battling for third that forced him to retire early. He was credited with an 11th-place finish.

Full results from the week can be found at www.WildWestShootout.net.

Tyler will be idle this week before trekking to Georgia’s Golden Isles Speedway on January 27-29, where he’ll kick off the 2022 Lucas Oil Late Model Dirt Series (LOLMDS) season.